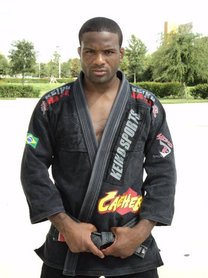 We are happy and honored at the same time to introduce one of the finest instructors and fighters at the same time. Din Thomas, second degree BJJ blackbelt was born on the 28th of September 1976 in Delaware/USA and there is no better way finding out who he is and what he brings to the table then letting the UFC veteran speak for himself.

“I first found interest in Martial Arts right after I graduated high school. All through high school I wanted to play American Football.

But every year I went out for the team, I would play for a few weeks and quit. Then it dawned on me that I was a quitter- not only was I a quitter, I was intimidated by the other bigger, more outgoing players on the team.

Shortly after having started my training, I started competing in Shootfighting competitions in Miami. After 3 years of competing as an amateur, I moved to Orlando and began training at different gyms from Boxing to Brazilian Jiu-Jitsu to Kickboxing gyms and Karate schools.

Shortly afterward, I turned professional and began fighting in some of the best organizations in the world at the time including World Extreme Fighting, Shooto Japan, and Superbrawl Hawaii.

It didn´t take too long before I signed with the UFC and fought in the lightweight division until the UFC decided to dissolve the entire division.

In 2007 I returned to the UFC as a welterweight cast member on the Ultimate Fighter TV show. I made it to the semifinals losing a close decision to Chris Lytle. I continued to fight for the UFC for 2 years after the show.

Since leaving the UFC, I won 4 out of 5 fights before retiring on Christmas day of 2013. Now I intend dedicate my time toward sharing my knowledge of MMA with fighters all over the world and empower those that are shy and give them the confidence to accomplish anything they put their mind to.

That is one of the main reasons why I decided to come to MMA Spirit, because

I´ve noticed a lot of talent and people who love to train one of the most beautiful and demanding sports out there.”

With Robert Pastuch we welcome a veritable powerhouse in our ranks. The born Argentine is highly motivated to establish himself in the sport and thus to work with MMA Spirit was just the next step to follow.

The first contact was created by his friend Bruno Carvalho and now we look forward to a successful time with Robert.

Robert wears black belts in BJJ as well as in Aikido, and has a lot of experience to offer as a coach, since he is the owner of a Martial Arts school in his home town of Buenos Aires.

Robert already made his first steps at the age of 7, when he began with Karate training. He discovered Brazilian Jiu Jitsu at the age of 24, after he had received his black belt in Aikido. After only two months of training, Robert started his BJJ career and meanwhile has made more than 40 competitions, in which he lost only three fights in total!

2008 Robert received his degree in “Sports Education” and worked a long time as a sports teacher in schools before he put the priority on the competition and finally arrived in the Mixed Martial Arts.

For requests of any kind (sponsorship, seminars and combat requests) please contact Niels Schlaegel via info@mmaspirit-ffm.com !

The amazing quality of our instructors takes no end- in this year´s period is no different, as we are happy and proud to introduce Juan Ignacio Yalour, born on the 22nd of January in 1984 as Robert Pastuch´s successor.

It has actually been Robert, who suggested him to take his place after leaving towards the USA. Both instructors have a history of an amazing six years having trained together in Argentina- this has made the transition for all Spirit members a very easy one.

Juan has an illustrious martial arts background, which he has carried around the globe to MMA Spirit. He started his Judo training aged six and followed that path for the next four years before he has had the only martial arts break of his life until 14. It was then when he started training Shotokan Karate and Aikido for another three years before he tried to find a new passion with Luta Livre. His training “only” lasted one and a half years as he felt no passion for the sport, which should dramatically change once he got in touch with Jiu Jitsu- the rest is history as he never stopped training even during his five years at Buoneos Aires´s “Belgrano” university.

His education, which was financed by a scholarship, ended with him being promoted as a qualified psychologist. He decided to move on to Germany aged 25, where he put his effort into more educational work at Cologne´s university – aiming for a phd. But it was his love for Jiu Jitsu that finally made him turn his back to an academic career.

He started his own Jiu Jitsu group, before MMA Spirit came knocking in summer 2013. It was an easy decision for both parties to get together and we are happy to have this strategy oriented Grappling and MMA instructor as a part of our team. Juan has already been training with some of the biggest stars in MMA and Jiu Jitsu such as Rodigo “Minotauro” Nogeira, De La Riva and Roan “Carneiro” Jucao, only to mention a few. His love for mixed martial arts has been enlightened via the multiple Jiu Jitsu world champion Demian Maia in 2009, when he was able to submit Chael Sonnen in a UFC middleweight fight. We are looking forward into a bright future with Juan.

Born on the 8th of October in 1979, Flavio is one hell of a black belt in Jiu Jitsu. He is part of the world famous “Brazilian Top Team” and it has been their camp, where he graduated to become a “faixa preta”…and he fully deserves his degree having won the world championships on two occasions. We have been glad to have had this highly experienced athlete instructing our MMA and Jiu Jitsu classes to have guided anyone interested in this sport forward to reach their personal goals. We would like thank Flavio for the great effort he has shown and wish him all the best in his future.

Anyone who ever takes a closer look at modern thaiboxing will sooner or later find out about the thaiboxing legend „Watcharachai Kaewsamrit“, who is especially known in Europe ever since he has stayed at London´s Keddle gym to pass on his knowledge. But he has of course celebrated his biggest success in his native country Thailand- fighting out of the famous „Kaewsamrit“ gym, which was voted „gym of the year“ several times while even overcoming Buakaw por Pramuk´s gym. „Kawsamrit“ also hosts the two superstars Anuwat Kaewsamrit and Khunpinit Kiatawaan.

Delson definitely has to be described as a phenomenal strong athlete. The BJJ black belt was born on the 16th of November in 1977 and has always been in love mit martial arts- also being a Capoeira Mestre besides his faixa preta.

Pe de Chumbo became clearly famous after winning the IFL mma championship crown and later participating in “TUF-Brazil”. We have really enjoyed three months of great training with surely one of the best out there and wish Delson all the best for his future.

This explosive fighter and well known Thaiboxing instructor was born on the 13th of March in 1979- raised in Rio de Janeiro/Brazil. Diego first fell in love with Thaiboxing before finding his real passion in MMA. But he was first set to win multiple honors in Thaiboxing as well as in Muay Thai competition before he finally decided to put his efforts into Mixed Martial Arts.

We have had a wonderful time with Diego and any fan should check his decent fight record and his very entertaining highlight video.

Vitor Bomfim was born in Rio de Janeiro on the 18th of August in 1982 and has been familiar with MMA and Jiut Jitsu for more than ten years. He has received his „faixa preta“ (blackbelt) from non other than the head coach of Gracie Fusion „Gordo“. He has been training many fighters ever since and we can´t wait for him to get things started.

His sporting achievments speak for themselves: